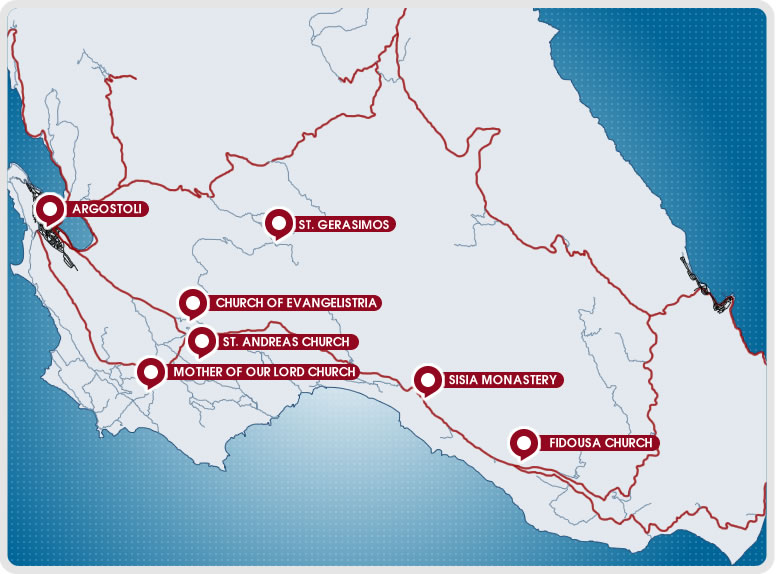 Our tour starts from the village Tomata of Kefalonia where the monastery that the coffin of Patriarch Gregory V is located. The holy martyr, according to the Orthodox Church, was hanged by the Turks on the day of Easter 1821 in Istanbul as retaliation for the uprising of the Greeks. The sacred relics of Patriarch found by Kefalonian ShipOwner Nicholas Sklavos, floating in the Bosphorus Sea who moved it to Odessa. The coffin was given to him as a blessing, he brought it back home and donated it to the church of Our Lady.

Moving to the village Markopoulo, there we have the opportunity to visit one of the most famous churches of Kefalonia, the Virgin Mary of Snakes (Fidousa) which receives thousands of believers each year to see up close the wonder ... small, harmless snakes that bring four small black dots in the shape of a cross onto their head! Appearing from 6 to 16 August in the rocks behind the Frankish church bell tower and crawl fearlessly among the people, in the church and on the icons.

Our next destination is the Monastery of Our Lady of Sission located in Lourdas bay. This is a male monastery. Its built dates back to the 13th century, when according to tradition, Francis of Assisi built it and devoted to Holy Mary and donates it to the Latin Diocese of Kefalonia.

Next stop is the Church of the Annunciation which built at 1580. The church is situated within the walls of the Castle of St. George. It was also the Cathedral of the Medieval capital of Kefalonia, until it moved to Argostoli. Every year on the first Sunday after Easter the the image of Virgin Mary is transferred here from the Monastery of Sissia, which remains here until the Sunday of the Samaritan Woman.

Next stop on this route is the center of faith in Kefalonia, the Holy Monastery of St. Gerasimos in the “Omala” valley. There, twice a year thousands of believers attending to venerate devoutly Saint Gerasimos’s relic and to pray. The Saints have been attributed numerous miracles and certainly the landscape is very devout.